Home
>
About PraiseMoves
>
Why a Christian ALTERNATIVE to Yoga?
>
Meet the Hindu Founder of “Christian Yoga”

The “Father of Christian Yoga” was Hindu?

Do you think so-called “Christian Yoga” is something new? I'll admit that I did when I first heard of it — but it goes as far back as the early-early 1900s!

As the founder of PraiseMoves, “The Christian ALTERNATIVE to yoga,” I have said for many years, “Christian yoga is an oxymoron, a contradiction in terms (like a “Christian Buddhist” – no such thing!). 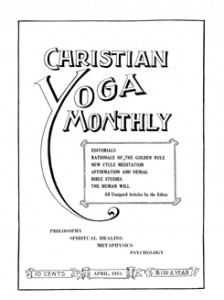 Above is an image of a copy of The Christian Yoga Monthly magazine from the early 1900s. For 10 cents one could get one's fill of “Philosophy, Spiritual Healing, Metaphysics and Psychology” along with the “Rationale of the Golden Rule, New Cycle Meditation and Bible Studies.”

Sounds like a real hodge-podge, doesn't it? Not exactly the latest edition of “Upper Room.”

Many think so-called “Christian yoga” is a nice, Christianized version of yoga (“There's no chanting, so it must be okay.”). Think again.

What is a practice dedicated to “Lord Shiva, the Destroyer,” known as the “Lord of Yoga” doing in the Church of the LORD JESUS CHRIST?

Is there Yoga for Christians? Well, Christian yoga is NOT a yoga alternative. It is YOGA. And there are reasons why Christians should not walk through that door.

Written over 100 years ago in 1911, here is the description of a book about “Christian Yoga Metaphysics” by the founder of the Christian Yoga Society.

He founded the Christian Yoga Church in Spokane, Washington. His teaching sought to combine Christianity with Hindu meditative practice.

In 1919 he moved to California, where he continued to grow his church at a new “church” in the San Bernardino Mountains. In 1924 he produced a film in Hollywood, “Beyond the Veil.”

The Life and the Way: The Christian Yoga Metaphysics – by A.K. Mozumdar 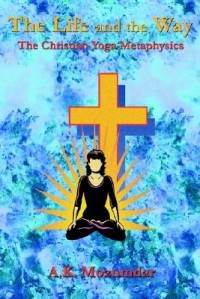 “A. K. Mozumdar was the founder of the Christian Yoga Society and this book outlines much of its spiritual philosophy.

“East and West and brought together to allow those from both spiritual backgrounds to enhance their growth and to possibly experience an all-pervading Oneness in the universe.

“This is an important spiritual work that is capable of transforming an individual. From reading it, one may discover a unique path to follow and achieve spiritual peace of mind.”

Notice on the book's cover the “self” sits in front of the cross of Jesus Christ. “With its back to the cross!” my husband Paul Willis said.

The “Father of Christian Yoga” lived from 1864-1953. Here's an interesting quote from Mozumdar who obviously denies that Jesus came to earth in the flesh, as a man (a basic tenet  of Christianity):

“If man thinks and acts, is not the thinker and actor God? If God is all life, then all lives are God. The creative power is the very nature of the being of the Creator; hence the creative power is God. Life is the Creator, and will never be reduced to the level of its own creation. This knowledge sets a man free.”

No, knowledge of the truth that Jesus is the only Way, the Truth and the Life sets one free. I for one am SO grateful that Jesus, the King of Glory, lowered Himself and came to earth as a man, His own creation, that He could be the perfect sacrifice for mankind.

What did the apostle John under the inspiration of the Holy Spirit say about testing the spirits, whether they are of God or not? 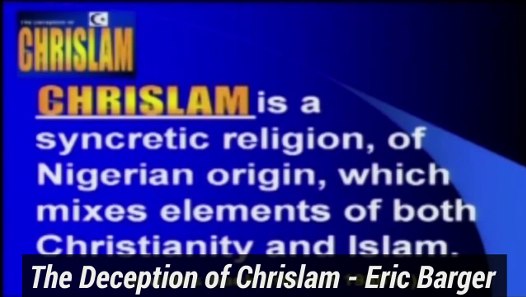 What in the World is “Chrislam”?

Have you heard of “Chrislam”? It's supposedly Christianity mixed with the Moslem faith. Most Christians would agree that Christianity and Islam cannot be mixed.

Syncretism = an attempted amalgamation of different religions, cultures, or schools of thought.

Chrislam is an attempt to syncretize Christianity with Islam. It began in Nigeria in the 1980s, Chrislamic ideas have spread throughout much of the world. The essential concept of Chrislam is that Christianity and Islam are compatible, that one can be a Christian and a Muslim at the same time.

But Christianity and Islam are NOT compatible.

So, why are some so ready to believe one can mix Christianity with Hinduism?

Christianity is a relationship, not a religion (although many have made a religion out of it – “Christian-ism,” perhaps).

Relationship is God-made. Religion is man-made.

Maranatha! Come quickly, Lord Jesus! In the meantime, let's OCCUPY with love until He comes!