Consider the Example You Set

Home
>
About PraiseMoves
>
Why a Christian ALTERNATIVE to Yoga?
>
Consider the Example You Set 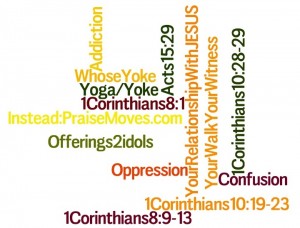 To strong Christians (strong in their relationship with the Lord as well as the strong-willed, strong-minded ones) I say:

Certainly, you may not be adversely affected by the subtle seeds of doubt and New Age thought planted in yoga classes. You may even be going to a yoga class that is devoid of much of the New Age lingo and Hindu phraseology.

And if not, perhaps you are able to see there is nothing inherently right or wrong with the “meat” or poses offered to idols (1 Corinthians 8: 4-8).

Perhaps you are oblivious to the visualizations and suggestions during the “meditation and relaxation” at the end of yoga class, the talk of chakras, auras, breathing in prana (the “life force” connecting us to the “Universal Life Force”) and getting in touch with our higher self to unite with “Universal Mind” (remember, I was a student and teacher of this stuff for 22 years). 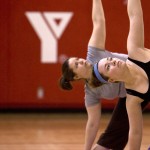 However, would you agree there are people in your life you influence?

Do you think there may be some unbelievers and new believers watching you?

Might someone young in the faith be watching you and saying to herself, “You know, she’s a strong Christian and loves Jesus. She does yoga at the YMCA (what does that ‘C’ stand for? Oh, yeah ‘Christian’). Seems there’s nothing wrong with it. But the Y is six miles from my house. I think I’ll take that yoga class being offered down the street at the Ramalama-DD Ashram”

(NOTE: Not its real name, but those who have been there with me know the place of which I speak.)

This young follower may not have your discernment. She may be like my mother and I were – weak and unskilled in the Word of God and open to the deceptions of the enemy.

Do you think she could perhaps wind up in the New Age movement as I did? Are we responsible for living our lives in such a way as to be a help or a hindrance to the cause of Christ? That’s a pretty tall order, isn’t it?

What’s wrong with this picture?

A young lady, perhaps in her 30s exclaimed to me recently, “The ‘C’ in YMCA stands for ‘Christian’? I didn’t know that!!!”

That should be a clarion call to the YMCA/YWCA. Perhaps the wrong message is being broadcast.