Home
>
About PraiseMoves
>
Why a Christian ALTERNATIVE to Yoga?
>
Planting Seeds of New Age Religion

I remember planting numerous seeds of New Age philosophy when I taught yoga classes – enough to make anyone without a firm foundation of Biblical knowledge doubt the veracity of God’s Word and fall prey to satan’s question to Eve, “Has God indeed said…?” (Genesis 3:1). 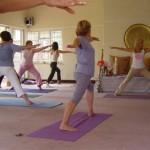 For example, I was convinced that there was no such thing as “sin.” All we had to do was “get in touch with god within and connect to Universal Mind.”

One of my favorite New Age parrot-isms was, “Nothing is either good nor bad, but thinking makes it so” (quoting Shakespeare like it was Bible!). Another favorite: “All is good. All is God.” And the real kicker whenever something bad happened to someone, “Well, they obviously drew this to themselves on some level to learn something.” What insensitive nonsense!

“Sin” I reasoned “is an acronym for self-inflicted nonsense.” How clever. How humorous. How deadly – for if there is no such thing as sin, then there’s no need for a Savior.

And if there’s no need for a Savior, then why did Jesus come? Oh, He was “just a good Teacher.” Then why didn’t I follow His teachings?

In John 3:3 Jesus said, “Most assuredly, I say to you, unless one is born again (from above), he cannot see the kingdom of God.”

But Yoga is NOT Meat!

For those who would argue with the scriptures in 1 Corinthians 8 and 10 and say, “But yoga poses aren’t MEAT!” Okay. Here’s a scripture that’s even clearer. I believe the Lord drew me to this scripture when I was praying to understand the differences among yoga, so-called “Christian yoga” and PraiseMoves – Acts 15:29.

The apostles were gathered together considering what rules should be placed on the Gentiles who were coming to Christ. Should they be circumcised, follow the dietary laws, etc.? Led by James, Jesus’ half-brother, they wrote a letter that has since become known as the Jerusalem Decree. In it they wrote:

“For it seemed good to the Holy Spirit, and to us, to lay upon you no greater burden than these necessary things: That you abstain from things offered to idols, from blood, From things strangled, and from sexual immorality. If you keep yourselves from these, you will do well. Farewell (Shalom)” Acts 15: 28-29.

“But I have a lot invested in being a yoga instructor (or student)” you may say.

Sometimes the measure of our growth in the Lord equals the size of the sacrifices we make to follow Him.

If you’ve been feeling “stuck” spiritually, letting go of yoga may be the next step the Lord is asking you to take.