Home
>
About PraiseMoves
>
Why a Christian ALTERNATIVE to Yoga?
>
Some PraiseMoves Postures Look Like Yoga?

“But wait a second, some of these postures sure look a lot like yoga poses.”

There are currently over 150 PraiseMoves postures – each linked to a portion of scripture.

Some of the PraiseMoves postures resemble yoga poses while others do not. For example, the 22 PraiseMoves Alphabetics postures are based on the 22 letters of the Hebrew alphabet (such as Lamed, at right).

Remember, the enemy (satan, the adversary, the deceiver) is NOT a creator. God alone is the creator. The enemy can only take things which God has created and “twist” them to bring people to the feet of a false idol (I’m sure you’ve seen that in relation to music –>> same music scale, same notes on a piano, but the music itself can glorify God or it can have the opposite effect). 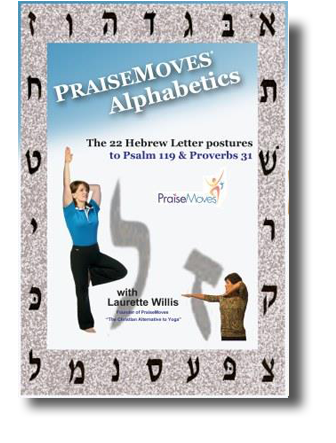 If I may be so bold, I consider PraiseMoves to be a redemptive work of the Lord. Realizing that “redeem” means to “buy back” or to “restore” something to the way it had once been, I like to think that moving our bodies to glorify God may not be such a new idea.

Two thousand years ago Paul wrote that “your body is the temple of the Holy Spirit” and that we are to “glorify God in our body and in our spirit, which are God’s” (1 Corinthians 6:19-20). King David “danced before the Lord with all his might” (2 Samuel 6:14) around 2800 years ago. After the Exodus from Egypt and crossing the Red Sea on dry ground Moses’ sister Miriam and the women danced and sang a song of victory to celebrate God’s triumph over their enemies about 3500 years ago (Exodus 15:20).

Critics tell me yoga is a “science” that goes back at least 5,000 years. If that is true, then I KNOW glorifying the God of the Bible in body, soul and spirit must go back further than that.

How can I possibly know that in light of the fact there doesn’t appear to be any references earlier than Exodus 15:20? I know that satan is not a creator. He is not capable of creating anything. God is the Creator (John 1:3 says of Jesus, “the Word made flesh” that “All things were made through Him, and without Him, nothing was made that was made” and “For by Him all things were created…visible and invisible… All things were created through Him and for Him” Colossians 1:16).

The enemy can only twist what God has already created to serve his own wicked purposes. In fact, the word wicked means “twisted,” like the wick on a candle or wicker furniture. 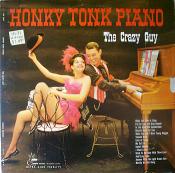 Rescued from a Honky Tonk? Here’s an example:

Imagine a piano was taken from a “honky-tonk” that was consumed by fire. Nothing is left of the place but ashes and rubble. The establishment was one that was clearly dedicated to carnality and sin, as well as “filthiness and superfluity of naughtiness,” as James 1:21 in the King James Bible would call it.

The piano is the one thing that survived the blaze. Is it possible to “redeem” (to buy back, to bring out of darkness) this piano once used to glorify the enemy?

Can we clean it up and use it in a church? Is this possible? Or should we destroy it?

Is it beyond being used to bring glory to God? Can we redeem the actual notes of the music scale once used in songs that worship everything but the Lord God — and use these SAME NOTES to offer praise and worship choruses to our Creator? Yes, indeed! Glory to God!!

Destroy all music because of ungodly music?

Are we to throw all music out the window because of the ungodly music in the world? Or can we redeem the notes on the music scale, the instruments, and the singers to offer worshipful praises to God? Of course, we can! Since “wicked” actually means “twisted” (like the wick on a candle I mentioned earlier), I like to think of PraiseMoves as a way to “untwist” beneficial stretching and strengthening exercises back to glorify God. 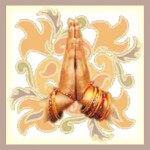 There are certain postures we will NOT do in PraiseMoves

I’ll admit there are certain poses and gestures we will NOT do in PraiseMoves because of their appearance and close association with other religions.

For example, did you know that the so-called “Praying Hands” gesture (putting one’s palms together with fingers pointing upward) is a mudra (Hindu prayer gesture) that pre-dates Christianity?

Yes, even though we love the paintings of the little children with their hands in that position while kneeling beside their beds saying, “Now I lay me down to sleep…” It is still too closely linked with the Hindu “Namaste” greeting (“I bow to the ‘divine’ within you”) and other Eastern religious practices, so we will not use it in PraiseMoves. 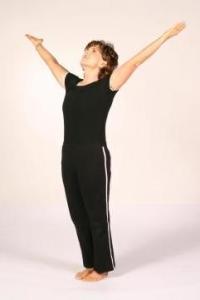 Besides, the Bible speaks of praising the Lord with uplifted hands, not palms pressed together: “Thus will I bless Thee while I live; I will lift up my hands in Thy name” (Ps. 63:4); “Lift up our hands in the sanctuary, and bless the Lord” (Ps. 134:2); and “…and the lifting up of my hands as the evening offering” (Ps. 141:2). At right is The Standing Cross posture with its accompanying scripture, “For the message of the Cross is foolishness to those who are perishing; but to us who are being saved, it is the power of God” (1 Corinthians 1:18).

What Does “Namaste” Mean?

From YogaJournal.com Basics by Aadil Palkhivala:

“The gesture Namaste represents the belief that there is a Divine spark within each of us that is located in the heart chakra. The gesture is an acknowledgment of the soul in one by the soul in another.

“For a teacher and student, Namaste allows two individuals to come together energetically to a place of connection and timelessness, free from the bonds of ego-connection. If it is done with deep feeling in the heart and with the mind surrendered, a deep union of spirits can blossom.

“The teacher initiates Namaste as a symbol of gratitude and respect toward her students and her own teachers and in return invites the students to connect with their lineage, thereby allowing the truth to flow—the truth that we are all one when we live from the heart.”

It all *sounds* so nice and spiritual, doesn’t it? But it is not Truth (the Way, Truth, and Life that Jesus is) and it is so very, very deceptive and deadly.

Instead, let us be the ones who are found with hands upraised, praising the Lord: ???

Having spent 22 years in yoga, metaphysics, and the “New Age” movement, I am like Christianity Today writer Holly Robaina in the “Take a Pass on Yoga” article (link above). I have a “big nose” for anything even slightly metaphysical or leaning toward “mystical Christianity.”

Just like a recovered alcoholic or former smoker can smell alcohol on someone’s breath or can tell if there’s been smoking in the non-smoking hotel room, former New Agers like Holly and I are super-sensitive to anything even vaguely “New Age-y.” And yes, as a recovered alcoholic and former smoker myself (by the amazing grace of God), I’m super-sensitive to those smells, too.