Where Yoga Leads (according to Hindus)

Home
>
About PraiseMoves
>
Why a Christian ALTERNATIVE to Yoga?
>
Where Yoga Leads (according to Hindus)

In an article dated May 14, 2006, Darryl E. Owens of the Orlando Sentinel quoted Sannyasin Arumugaswami, managing editor of Hinduism Today.

Arumugaswami said Hinduism is the soul of Yoga “based as it is on Hindu Scripture and developed by Hindu sages. Yoga opens up new and more refined states of mind, and to understand them one needs to believe in and understand the Hindu way of looking at God. … A Christian trying to adapt these practices will likely disrupt their own Christian beliefs.”

In an article entitled “An Open Letter to Evangelicals” from the January 1991 issue of Hinduism Today, Swami Sivasiva Palani writes:

“A small army of yoga missionaries – hatha, raja, siddha and kundalini – beautifully trained in the last 10 years, is about to set upon the western world. They may not call themselves Hindu, but Hindus know where yoga came from and where it goes.”

Swami Palani goes on to write:

“We hope this proves useful to you. I close with a quote from Swami Vivekananda, Hinduism’s greatest modern missionary, spoken in January of 1895, ‘What I now want is a band of fiery missionaries.’ It’s a hundred years late. But it appears he’s going to get his wish.”

In the West, the term “yogi” is used to refer to anyone who practices yoga. However, in the Bhagavad-Gita, the god Krishna says that the true yogi is one who has surrendered himself “fully unto me.”

Besides these historical evidences, I can clearly state from my own experiences and those of many I knew while in the New Age movement, yoga class was the door that led us into the New Age Movement. 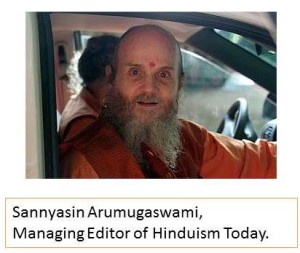 New Age is a combination of a number of religions and has as its foundation pantheism (the doctrine that all forces, manifestations, etc. of the universe are God; also, the worship of all gods) and astrology (the belief that the positions of the sun, moon, stars and planets guide or affect human affairs, and can foretell the future).

According to Swami Vishnudevananda, one of yoga’s most influential leaders, hatha yoga “prescribes physical methods to begin … so that the student can manipulate the mind more easily as he advances, attaining communication with one’s higher self.”

Maharishi Mahesh Yogi taught that through meditation, not salvation through Jesus Christ, “a sinner comes out of the field of sin and becomes a virtuous man.” This is an example of the erroneous philosophy of “salvation by works.”

It seems the student is being manipulated as well. Yoga’s “least religious” form, hatha yoga, influences one’s spiritual life as unmistakably as any one of the dozens of other yoga techniques.

Hatha yoga is actually seen as the stepping stone to raja yoga (the form said to involve “psycho-physical meditation techniques to attain an experience of the truth and ultimate liberation from the cycles of death and rebirth, or moksha”).

Yoga claims physical and mental disciplines bring about union with God. According to Maharishi Mahesh Yogi (once associated with the Beatles), meditation “brings us more ability for achieving something through right means, and very easily a sinner comes out of the field of sin and becomes a virtuous man.” Sounds like salvation by works (instead of by grace) doesn’t it?

The Bible tells us: “For all have sinned; all fall short of God’s glorious standard. Yet now God in His gracious kindness declares us not guilty. He has done this through Christ Jesus, who has freed us by taking away our sins… We are made right with God when we believe that Jesus shed His blood, sacrificing His life for us” Romans 3:23-25 NLT.