Why We are NOT Christian Yoga

Home
>
About PraiseMoves
>
Why We are NOT Christian Yoga

Yoga and Christianity Do Not Mix 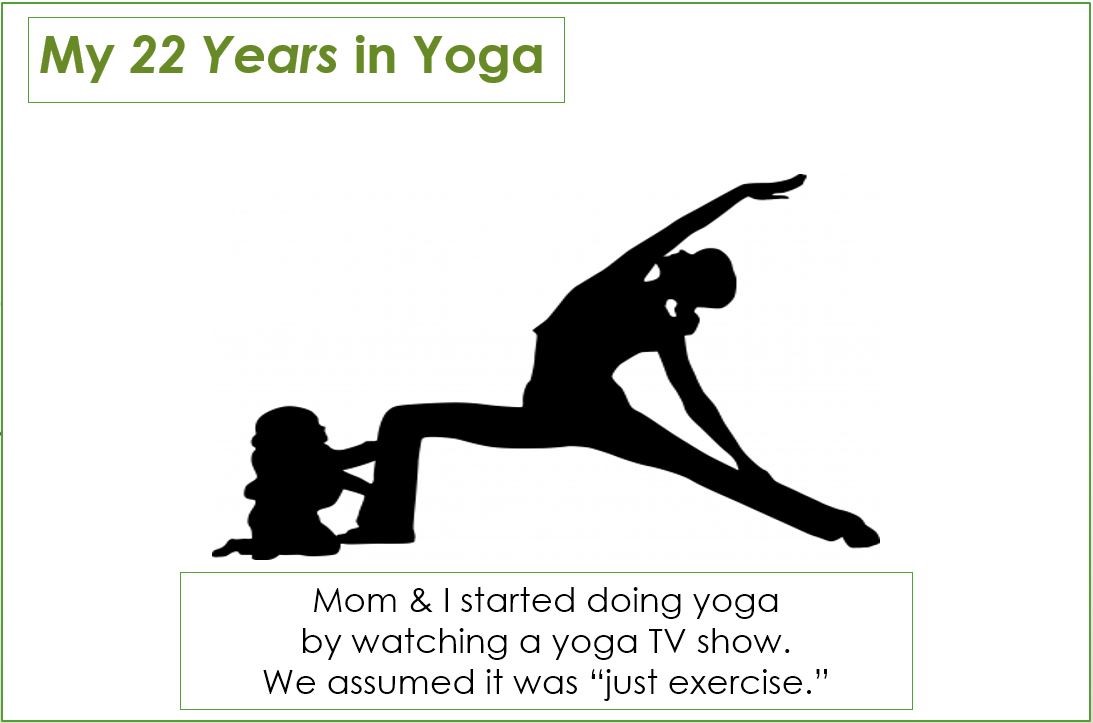 As a child growing up on Long Island, I was quick to entertain, singing and dancing to “Hello Dolly!” I was also quick to follow my mother into the practice of yoga. We both thought it was “only exercise.”

Yoga is not “just exercise.” And now there’s even so-called “Christian yoga” which is VERY different from PraiseMoves, the Christian ALTERNATIVE to yoga.

Yoga seems to be everywhere. In ads for everything from IT to ice cream, meditative supermodels sit cross-legged in the Hindu Lotus position, contemplating “nirvana.”

There are yoga videos for pregnant mothers, senior citizens, toddlers, and babies – even yoga with your dog, goat, or snake! And don't forget the allure of Yoga in the GRAVEYARD?!!! Yes, believe-it-or-not, there is a practice called “Yoga Mortis” – yes, like rigor mortis.

You can work out with yoga straps, blocks, bolsters, and balls. The well-dressed yoga practitioner can wear her loose-fitting yoga togs, carry her yoga mat in her matching yoga tote and dress her daughter in stylish yoga pants (featuring her favorite cartoon character).

Since yoga is everywhere, it must be okay. Or is it?

Those who think yoga is little more than a series of stress-relieving stretching exercises may be surprised to learn about the true foundation of the multi-billion dollar yoga craze in North America.

Take a look at some of these numbers from Yoga Journal's “Yoga in America Study” from 2016. See how the numbers have increased from 2012 to 2016.

Even though this study focuses on Yoga in America, similar numbers can be found all around the world. 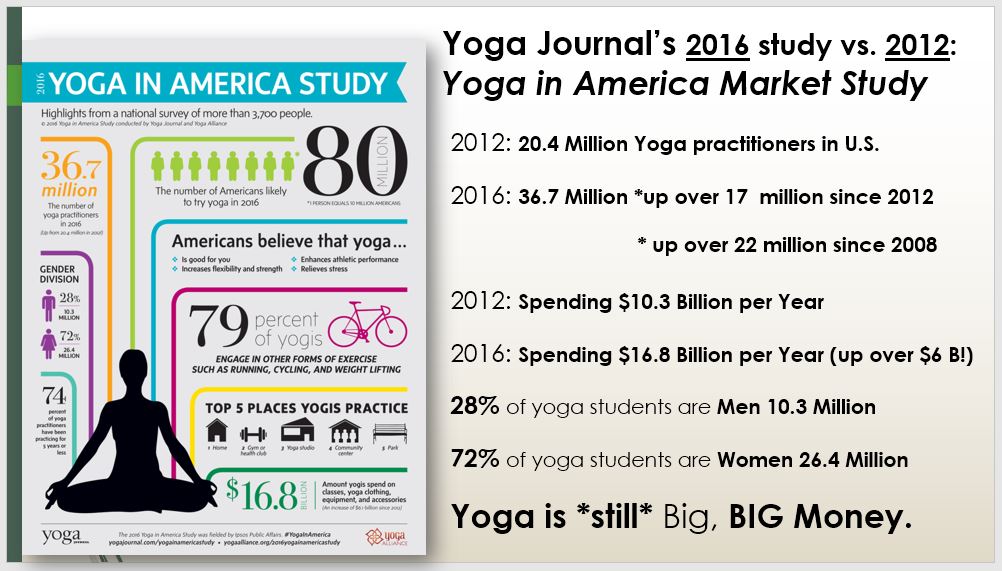 According to Webster’s New World Dictionary, yoga is an East Indian Sanskrit word which means “union with god” or “to yoke.”

The yoke of yoga is different from the one Jesus refers to when He says, “Take My yoke upon you and learn from Me, for I am gentle and lowly in heart, and you will find rest for your souls. For My yoke is easy and My burden is light” (Matthew 11:29-30).

According to Webster's, YOGA IS: “a mystic and ascetic Hindu discipline for achieving union with the supreme spirit through meditation, prescribed postures, controlled breathing, etc.”

Merriam-Webster’s online dictionary defines yoga as a “Hindu theistic philosophy teaching the suppression of all activity of body, mind, and will in order that the self may realize its distinction from them and attain liberation.”

By its own definition, yoga is “a mystic” (occult) and ascetic (self-denying) Hindu discipline” for the purpose of “achieving union with the supreme spirit…”

How is this union achieved–through faith in Jesus Christ? By confessing with your mouth that Jesus is Lord and believing in your heart that God raised Him from the dead (Romans 10:9-10)?

“Achieving union with the supreme spirit” (who is NOT Jesus, but the Lord of Yoga) is achieved “through meditation, prescribed postures (yoga poses, which are “offerings to the 330 million Hindu gods”), controlled breathing, etc.”

According to Webster's Dictionary, Shiva is the Hindu god of destruction and rebirth (part of the Hindu “trinity” of Brahma, Vishnu & Shiva)

According to the Bhagavad-Gita:

What is a practice dedicated to “Lord Shiva the Destroyer” doing in the Church of the Lord Jesus Christ?

Yoga is a spiritual discipline.

Yoga is not “just exercise.” There are powerful spiritual elements the average yoga practitioner does not see–but which still has an effect on them.

My own 22 years in yoga (from ages 7 to 29, I was both a Yoga Student and Yoga Instructor) have made me acutely aware of the dangers of yoga.

We see from Merriam-Webster's online dictionary definition above, yoga is a “theistic (relating to God or gods) philosophy” which teaches the “suppression of all activity of body, mind, and will” so that one's inner self may be freed from them and attain “liberation.”

Could we say that “liberation” is another word for “salvation“? 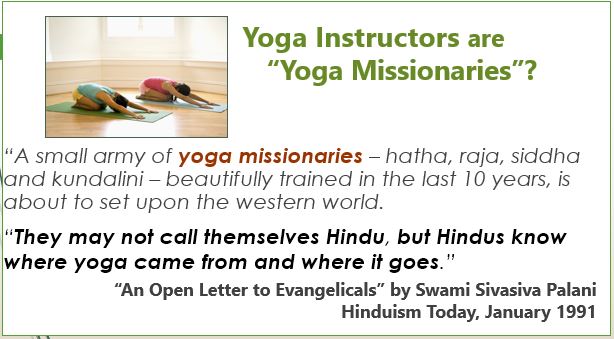 According to Swami Sivasiva Palani from his January 1991 “Open Letter to Evangelicals” in Hinduism Today, yoga instructors are “Yoga Missionaries.”

“A small army of yoga missionaries – Hatha yoga (the form of yoga taught in most fitness centers and churches), Raja, Siddha, and Kundalini (other forms of yoga) – beautifully trained in the last 10 years, is about to set upon the western world,” wrote Swami Palani.

“They may not call themselves Hindu, but Hindus know where yoga came from and where it goes.”

Christian writer Holly Robaina, like me, was delivered out of New Age spirituality. She shared with me regarding yoga and Christianity:

“I have seen more Christians led away from Christ and into the New Age through the ‘door of yoga' than the other way around.”

In an article by Holly Robaina in Christianity Today, she maintains that PraiseMoves is NOT so-called “Christian Yoga” and explains the differences she sees between yoga and PraiseMoves, which is the Christian ALTERNATIVE to yoga.

“…[some] believe PraiseMoves is yoga with Christian terminology thrown in. I’d correct that statement and say Laurette’s program is a Christian stretching program that seeks to reflect the physical benefits of yoga while replacing Hindu spiritualism with Christian worship.“

Read the rest of her article “Take a Pass on Yoga” here.

By the way, so-called “Christian yoga” is an oxymoron or contradiction in terms such as a “Christian Buddhist” or “Christian Hindu” — there is no such thing!

To learn more, here is where you can meet the HINDU FOUNDER of “Christian yoga.”