Jerusalem Post update — and an AMAZING video about the correlation between how we treat Israel and the blessings or cursings which come upon us– with solid dates, weather patterns, even a scandal revealed.

While our main focus on this blog is all aspects of “Christian Fitness,” I wanted to share this answer to prayer. Countless thousands were praying for “Bibi” Netanyahu and for God's words and wisdom to flow forth from him with the compelling voice of Truth. God answers prayer. This is a follow-up to Monday's blog “Pray for the Peace of Jerusalem.” You may consider this “Christian Fitness–for spirit, soul and body” – Prayer Works!!! 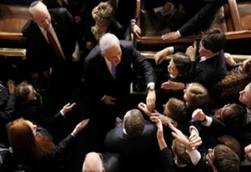 Netanyahu could only dream of such a reception in Israel; Congress' ovation was heard by Obama, the Palestinians, the world at large.

The overall importance of Prime Minister Binyamin Netanyanhu’s speech to a special joint meeting of Congress on Tuesday was not in the substance – he did not break any radical new ground – but rather in the overwhelmingly warm ovation he received.

Netanyahu could only dream of such a reception in Israel. Even his wife, Sara, received a standing ovation when she entered the hall.

The prime minister was applauded some 30 times, many of those accompanied by standing ovations.

The nearly four-minute ovation he received when he entered the historic chamber – including a brief period of rhythmic clapping that sounded more like the Mann Auditorium than Congress – was not only heard by Netanyahu, but also by US President Barack Obama, the Palestinians and the world at large.
With all the talk of the country’s existential loneliness, and Israel’s real sense of isolation, when Netanyahu spoke to the most important parliament in the world, it exuded nothing but warmth toward Israel.

Even the prime minister’s comment that Jews are not interlopers in Judea and Samaria – not like the Belgians were in the Congo or the British in India – received raucous applause and standing ovation by most in the hall.

With the resounding applause, on both sides of the aisle, to Netanyahu’s comments on a unified Jerusalem, not returning to the 1967 lines, not negotiating with Hamas, not allowing the descendants of Palestinian refugees to enter Israel, Obama – currently tending to US business in Europe – received a clear signal from Congress that when it comes to Israel, his hands are not free.

“I will bless those who bless you” Video

Here is an astounding video. Having just ridden out the May 22 and May 24, 2011 storms in Oklahoma, one cannot help but consider the correlation to events of this past week in our dealings with Israel (see my previous post, “Pray for the Peace of Jerusalem“).