Catholics and New Age: A new twist on yoga 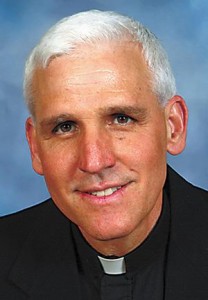 (This column is the second and concluding one of Father Bill Kneemiller’s reflections on his involvement in New Age practices. From The Catholic Messenger)

A prime example of “New Age” inroads is the phenomenal growth of the practice of yoga in our culture. Yoga’s claims for relaxation and health benefits appeal to the estimated 15 million to 20 million U.S. citizens taking instructions at more than 20,000 locations. A Catholic priest recently told me that the exercise part is not so bad, it’s the “ooga-booga” that goes with it. I understand his comment to mean foreign terms and ideas which we may not truly understand, but go along with.

The word yoga in Sanskrit means union and implies a religious yearning for union with a higher being. But, can simple exercises of yoga be separated from its philosophy? The American Heritage dictionary’s primary definition for yoga is: “A Hindu discipline aimed at training the consciousness for a state of perfect spiritual insight and tranquility.” Only secondarily does it mention a system of exercises.

In 2003, the Pontifical Document “Jesus Christ, the Bearer of the Water of Life: A Christian Reflection on the New Age” states that yoga, Zen Buddhism and other ancient religions flow into New Age thought. The key difficulty for Christians is that the origins of yoga were prayer postures to Hindu deities. I can hear the objections as I write these words: “But yoga helps me to relax”… “It’s just simple stretching exercises”… “Yoga has moved far beyond that.”

I know the exact sentiments as I also taught yoga for years. Now when I see New Age literature, the Eastern, or Hindu terminology jumps off the page. I no longer think it’s cool to talk about “self-awareness” or “higher consciousness.” However, the desire for good health and being limber is something all of us desire. I will take a look at how some Evangelical writers are advocating “PraiseMoves” as a substitute for traditional yoga.

Recently in “Christianity Today” author Holly Vicente Robaina wrote about the 180-degree turn of her views on yoga in the article: “Take a pass on yoga.” Her findings mirror my conclusions: “Yoga has a history, a ‘setting’ of postures and language that pays homage to Hindu deities. While American instructors may water down that language, I think it’s safe to say most are still using it. The word ‘namaste’ is still used in many yoga classes … and it’s a term Hindus use when paying respect to their deities. Even when used between friends, the term still really means, ‘I bow to the god within you.’”

As I write these words, I think of the hundreds of times I practiced a yoga posture called the sun salute, meaning “I bow down to the sun.” I never thought of the meaning behind the words. But now I do. I also recall that the first commandment makes this very clear, “Have no other gods before me.” In all those years did any of this ever occur to me? Not really, as I was so caught up in the lure of physical prowess, mystical experiences, or stories of past yogis of old.

The solution for Holly Robaina is to substitute “PraiseMoves” for her yoga class, for both adults and children. Laurette Willis, founder of PraiseMoves (www.praisemoves.com), offers an in-depth view of yoga and alternatives. PraiseMoves is an alternative to yoga, and is not “Christian yoga.”

Her foundational Scripture is 1 Corinthians 6:20, “For you were purchased at a price; therefore glorify God in your body and in your spirit, which are God’s.”

People who have been looking for a safe alternative to yoga have told her that PraiseMoves is answered prayer. PraiseMoves integrates a posture with a corresponding Bible Scripture. For example, during a posture called The Altar, participants reflect on Romans 12:1: “I urge you therefore, brothers, by the mercies of God, to offer your bodies as a living sacrifice, holy, and pleasing to God, your spiritual worship.”

Doesn’t it make sense to integrate exercise and prayer? After all, many individuals pray when they walk or jog in the morning. As I reviewed some of the Evangelical authors, I realized that they adapted the stretching exercises of yoga and Christianized them, something Catholics have been doing for centuries with pagan rituals. Our Catholic faith is extraordinarily rich, vibrant and full of inexhaustible treasures of God’s word.

We have the living presence of Christ in the Eucharist, which is a treasure beyond description. We have the tender and immaculate love of Mary leading us to her Son. We are also blessed with the communion of saints, cheering us on to a closer intimacy with Christ our savior. If we can experience even a small taste of these spiritual treasures, their beauty will fill our hearts’ deepest longing for God’s grace and presence.

(Fr. Kneemiller is pastor of St. Joseph Parish in Hills and St. Mary parishes in Lone Tree and Nichols.)

From The Catholic Messenger