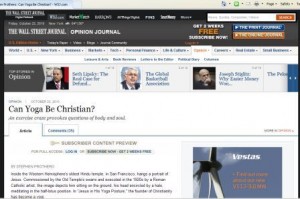 I received a bit of a surprise the other evening. We were on our way home from Tulsa, having attended the Guts Church yearly evangelical outreach for teens – Nightmare – when I picked up this fascinating article in my Google alerts.

The amazing thing was that no other alternative to yoga was mentioned in the article — just PraiseMoves! Needless to say we are honored and thrilled with the attention, and humbly thank Mr. Prothero and WSJ.com for the nod in our direction.

Here is the article, with a link to its source on WSJ.com. I have bolded in blue the reference to PraiseMoves.

I disagree, however, with Mr. Prothero's opinion that we are “working to bend yoga toward Christian ends.” We would consider it more of an “untwisting” than a bending. The word “wicked” means “twisted” (like the wick on a candle, or wicker furniture). Since redemption involves being bought or brought out of darkness, as believers we have been redeemed, and seek to do the same.

10/28 update: We've been mentioned and my comments accepted in two other articles: Religion Dispatches (“Is Downward Dog the Path to Hell?”) and Toronto Life (“Saluting the Sin”). Working on a press release now “Ex-Yogi Counters ‘Yogaphobia' Claim.” Thank  you for your prayers and support as we get the Word out. No fear here — just amazing grace. ~ LW

Can Yoga Be Christian?

An exercise craze provokes questions of body and soul

Inside the Western Hemisphere's oldest Hindu temple, in San Francisco, hangs a portrait of Jesus. Commissioned by the Old Temple's swami and executed in the 1920s by a Roman Catholic artist, the image depicts him sitting on the ground, his head encircled by a halo, meditating in the half-lotus position. In “Jesus in His Yoga Posture,” the founder of Christianity has become a yogi.

Over the past generation, so have millions of Americans—a development that has some Christian leaders concerned.

Last month, R. Albert Mohler—president of the Southern Baptist Theological Seminary and “the reigning intellectual of the evangelical movement in the U.S.,” according to Time magazine—wrote that the practice of yoga among American Christians is “a symptom of our postmodern spiritual confusion.”

Christian yogis, according to Mr. Mohler, “must either deny the reality of what yoga represents or fail to see the contradictions between their Christian commitments and their embrace of yoga.” As he later told the Associated Press, “The idea that the body is a vehicle for reaching consciousness with the divine . . . that's just not Christianity.” In other words, man up and choose—you can't have your savior and your sun salutation too.

This concern isn't new. In 1989, the Vatican warned its faithful that yoga and other Asian contemplative practices could “degenerate into a cult of the body.”

Perhaps unintentionally, Mr. Mohler's statements largely echo what Hindu thinkers have long said about the Americanization of yoga. When I discuss the ongoing yoga craze with Hindus, they do not object to their venerable tradition being twisted toward sometimes banal ends. They ask only for practitioners to acknowledge that yoga emerged in ancient India and that its original intent was spiritual—a path to liberation rather than weight loss.

“Yoga cannot be neatly separated into physical and spiritual dimensions,” Mr. Mohler has said. “The physical is the spiritual in yoga, and the exercises and disciplines of yoga are meant to connect with the divine.”

Mr. Mohler does American Christians a favor by encouraging them to think more deeply about where the traditions of Christianity and the practice of yoga diverge. But he missteps when he insists that “Christians are not called . . . to see the human body as a means of connecting to and coming to know the divine.”

Catholics, of course, have long seen the seven sacraments—including baptism, Eucharist and others, all of which by definition operate on the body—as vehicles of grace. And Protestants, including Mr. Mohler's Southern Baptist denomination, have typically affirmed the sacramental nature of baptism and Holy Communion. There is no bending or twisting in these rites, but in both Protestants traditionally see the human body as a means of connecting oneself to the divine.

Christians have always been pulled in two different directions—the Jewish and the Greek—on the question of the body, a tussle that played out in early Christian disagreements over sex and marriage, for example. The Greek approach influenced the early Christian view, called docetism, that Jesus was a spirit with only a phantom body. But by the time of the Nicene Creed of the fourth century, Christians had dismissed that view as heresy. That opened the way for Thomas Aquinas's more Jewish-inspired view of the human being as body plus soul.

So it is not quite right to conclude that, while Hindu yogis get to the divine through the body, Christian believers get to the divine only through the spirit. As organizations such as the Young Men's Christian Association and the Fellowship of Christian Athletes attest, there is a strong tradition of “muscular Christianity” that sees physical fitness as building character and forming faith. And recent innovations such as “PraiseMoves”—”the Christian alternative to yoga”—are working to bend yoga toward Christian ends.

Religious traditions have long been mixed and matched. Indeed today's Southern Baptism is a cocktail of ancient Christian texts, Reformation theology and modern American preoccupations, including support for creationism. But don't expect to find Mr. Mohler in the half-lotus position any time soon.

Mr. Prothero, a professor of religion at Boston University, is the author of “God Is Not One: The Eight Rival Religions That Run the World—and Why Their Differences Matter” (HarperOne).

See the full article on WSJ.com here: “Can Yoga Be Christian?”