21 Days of Fasting – Righteousness Before You

Home
>
Articles
>
21 Days of Fasting – Righteousness Before You 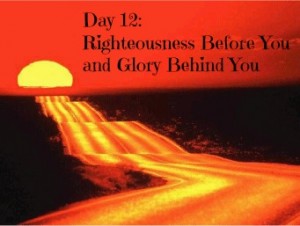 DAY TWELVE – “Is this not the fast that I have chosen… And your righteousness shall go before you; The glory of the LORD shall be your rear guard…” (Isaiah 58:6&8).

Another reward of fasting we are promised (and the significance of the number twelve).

Righteousness going before you and the Glory of the Lord will be your rear guard.

We have all experienced adversity and challenging experiences. Isn’t it good to know that you have a shield of protection before you and behind you?

The Glory — the manifested presence “heavy with everything good” and magnificence — of the Lord will be your rear guard. No wonder the Armor of the Lord in Ephesians 6 only has armor for the FRONT of you. You don’t need any thing else when you have the Glory of the Lord!!!

You Can Do it Now — Put on the Armor of God!

“Stand therefore, having girded your waist with truth, having put on the breastplate of righteousness, and having shod your feet with the preparation of the gospel of peace; above all, taking the shield of faith with which you will be able to quench all the fiery darts of the wicked one.  And take the helmet of salvation, and the sword of the Spirit, which is the word of God;  praying always with all prayer and supplication in the Spirit” (Ephesians 6:11-18).

Biblical Significance of the Number 12

Old Testament: The number twelve speaks of governmental perfection or rule. As a symbol, twelve is one of the perfect numbers in the Bible mainly because of the twelve tribes of Israel. Saying the “twelve tribes of Israel” has a double meaning. The tribes are the sons of Jacob whose name was changed to Israel when he wrestled with God. Also, the tribes are of Israel, the nation. Many things in the Bible acknowledge and are patterned after the twelve tribes.

“All these are the twelve tribes of Israel, and this is what their father said to them when he blessed them, giving each the blessing appropriate to him” (Genesis 49:28).

Following the exodus, Moses built twelve pillars on Mount Sinai (Exodus 24:4). Twelve spies were sent to spy out the land (Deuteronomy 1:23). Twelve stones were set as a memorial after crossing the Jordan River (Joshua 4:3). Twelve stones were attached to the breastplate of the priestly garments bearing the names of the twelve tribes (Exodus 39:8-14). The temple involved twelve in its measurements and furnishings.

New Testament: Jesus speaks His first words at the age of twelve (Luke 2:42). Later, He chooses twelve disciples. Later, twelve baskets of fragments were collected after Jesus fed the five thousand (Mark 6:43). The Book of Revelation says there are twelve gates to the city, twelve angels as gatekeepers and the names of the twelve tribes written on the gates. The gates are twelve pearls and the wall will be on twelve foundations which bear the names of the twelve apostles. The measurements of the New Jerusalem also involve the number twelve in its measurements.

The tree of life that once stood in the Garden of Eden and was forbidden to Adam will stand in the city and be accessible to all of us. It will bear twelve kinds of fruit for the healing of the nations (Revelation 22:2).–from TurnBacktoGod.com

DAY ONE – Delight in the Lord (instead of food?)

DAY FOUR – DO and then Feel

DAY SIX – YOU Break Every Yoke

DAY SEVEN – What are You Feeding On?

DAY NINE – The Mind of Christ