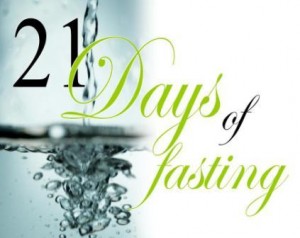 Day Three: Fasting Update – Jesus said something quite remarkable to His disciples in John 4:34, “My food is to do the will of Him who sent me and to finish His work.” What an extraordinary thing to say! His “food” (a noun) became an action (“do,” a verb).

In Greek, “do” is “poiéō” which carries with it the suggestion that the action produces something which takes on a life of its own.

In Zodhiates’ The Complete Word Study New Testament he writes, “Poiéō may well refer to the doing once and for all, the producing and bringing forth something which, when produced, has an independent existence of its own.”

That’s sort of like Christianity, isn’t it? The Church seems to have an independent existence of its own, yet is inextricably linked as the Body of Christ to its Head, the Lord Jesus Christ.

Since we are Christians (“little Christs”), we are to be imitators of Him “as dear children.” How many of us can say our food is to do the will of Him who sent us? I ask myself, “What am I really ‘feeding on’ physically, mentally, and spiritually? Have I ‘eaten’ today; have I been doing the will of the Father, or merely filling my mouth and mind with ‘empty calories?’”

I purpose to eat at His table, in His presence, so that His will be done in my life. His food is truly filling and fulfilling.

Have you ‘eaten’ today?