Overcome by the Blood and the Word of Your Testimony

“And they overcame him by the blood of the Lamb and by the word of their testimony, and they did not love their lives to the death” (Revelation 12:11).

When I was a little girl, I was overweight and was picked on by other kids at school.

“FATSO!!!” they would laugh, pointing at me. I would run home, crying.

As you can imagine, that demolished any self-esteem I had. I continued to say those things to myself in the mirror for the next TEN YEARS. And even though I stopped staying those hellacious things to myself as an adult, the WORDS continued to play on a loop in my mind for many years — especially the “You're FAT” words which started it all. 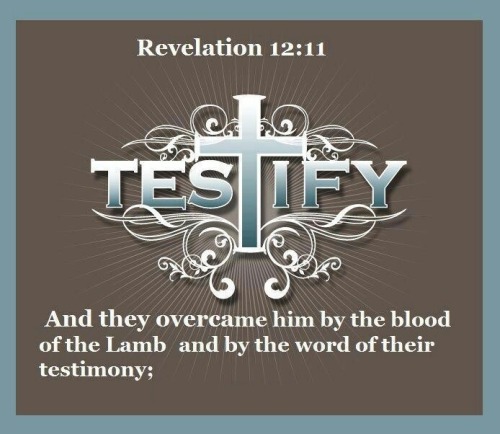 Thankfully, once I became a Christian, I learned how to be “transformed by renewing (my) mind” on the Word of God (Romans 12:2). It was a GOOD kind of brain-washing that was needed, and the “washing of the water by the Word” supplied it (Ephesians 5:26)!

Here's what I did, and still do when words contrary to the TRUTH of God's Word hit me. I invite you to do this, too:

You can say something like, “I plead the Blood of Jesus over me. I overcome by the Blood of the Lamb of God, and by the Word of my Testimony, just as Scripture says in Revelation 12:11.”

2. Cast down “vain imaginations” (“Casting down imaginations, and every high thing that exalteth itself against the knowledge of God, and bringing into captivity every thought to the obedience of Christ,” 2 Corinthians 10:5 KJV).

This is where I act like a 4-year-old child (in a GOOD way!). I reach up to my forehead as if grabbing the ugly thought. I throw it down to the floor and step on it, saying: “I cast down that vain imagination, that high thing that is exalting itself against the knowledge of God. I bring into captivity EVERY thought to the obedience of Christ, obedience to the Word of the living God!”

3. Now, SPEAK the Word of God aloud over yourself–SPEAK the Truth of what your Heavenly Father says about you. Speak aloud because “Faith comes by HEARING and hearing by the Word of God” (Romans 10:17). Besides, you believe more what YOU say than what anyone else says 😉

If “I can't do it” is the “vain imagination,” cast it down and say instead, “I CAN DO ALL THINGS THROUGH CHRIST WHO STRENGTHENS ME!” (Philippians 4:13).

If “I'm afraid” is the lie the enemy is using to try to stop you, cast it down and say instead, “I REBUKE FEAR! FEAR GO, IN THE NAME OF JESUS! GOD HAS NOT GIVEN ME A SPIRIT OF FEAR, BUT OF POWER, AND OF LOVE, AND OF A SOUND MIND!” (2 Timothy 1:7).

Whatever the lie is that the enemy is using against you; whatever the old tape in your head says… I promise you that when you do this–no matter what is going on in your life and between your ears–you will begin to walk in the victory the Lord has for you.

You, yes YOU, will overcome by the Blood of the Lamb and by the Word of your Testimony. He is faithful who promised you. Glory to God!!!

P.S. For more tips on how to Renew the Mind + Retrain the Brain.
Here's the Replay to My Free Master Class that explains it for you.
“3 Simple Shifts to ​​​​​​​Fulfill the CALL on Your Life” HERE.