Home
>
About PraiseMoves
>
Why a Christian ALTERNATIVE to Yoga?
>
“The Lord of Yoga”? 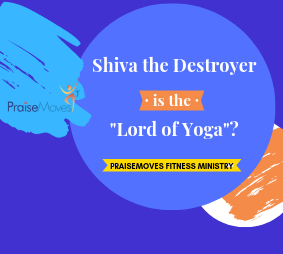 More Evidence that Yoga and Christianity Do Not Mix.

Why is Yoga more than “just exercise”?

Meet Shiva, “The Lord of Yoga”

This Hindu idol (god/demon) is only 1 of the 330 million Hindu gods. Yoga poses are offerings to these gods.

The “Lord of Yoga” is “Shiva, The Destroyer” also known as “The god of Death.”

This is one reason I have been quoted as saying, “Yoga is a Discipline of Death.” When one believes in reincarnation, as Hindus do, the sooner one dies, the sooner one goes into the next life.

While Hinduism recognizes millions of gods (and yoga poses are “offerings to the 330 million Hindu gods“), the trinity of chief Hindu gods includes Brahma (creator), Vishnu (preserver) and Shiva (destroyer).

The Hatha Yoga Pradipika (HYP) is a classic text for Hatha yoga (the type of yoga taught in fitness centers and many churches).

According to this text, “The (real) Yogi becomes the creator and destroyer of the universe, like God.” Ch. 4.76, HYP

Yoga is motivated by a spirit that inspires self-deification — with a promise of reincarnation. That sounds familiar!!!

“And the serpent said unto the woman, ‘You will not surely die. For God knows that in the day you eat of it your eyes will be opened, and you will be like God, knowing good and evil” (Genesis 3:4-5).

“But They Do Yoga in My Church.” 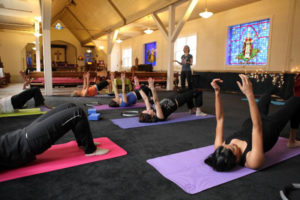 It’s a different yoke from the one Jesus talks about when He said: “My yoke is easy and My burden is light” (Matthew 11:30).

Why would churches of the Lord Jesus Christ have a practice yoked to Shiva the Destroyer, the Lord of Yoga?

Would you agree that the root of something can affect its fruit?

In Ephesians 6:12, the Holy Spirit wrote through Paul:

“We do not wrestle against flesh and blood, but against principalities, against powers, against the rulers of the darkness of this age, against spiritual hosts of wickedness in the heavenly places.”

Whether yoga or so-called “Christian yoga,” do you see a problem with a practice dedicated to “Lord Shiva” in the Church of THE Lord Jesus Christ?